Encouraging reading, travel, and discovery of people and places that make up our historical past!

I am a history lover, for sure, but I also find a different kind of peace when I am outside in nature.  I enjoy exploring beautiful places. I am not a brave solo hiker, but I do enjoy walking around in scenic areas and exploring with a tour guide.  My love of nature and the outdoors has developed over time.  I never truly appreciated the natural beauty of our country other than the ocean and flowers, until recently.  It wasn’t until I moved to the east coast and had the opportunity to watch seasons come and go, and realized how it all works, that I fell in love with the natural world.  It was with my new found love of nature that I began exploring state parks.

Recently, I set a new goal for myself.  I am going to make a serious effort to visit every National Park in the United States over the next five years.  That goal started burning in me after visiting Acadia National Park in October 2018.  I absolutely loved that trip.  When I was out on a boat tour and had the pleasure of seeing an American Bald Eagle flying totally free, just soaring free not that far above me, and then landing in tall trees along the coast of Maine, I was hooked.

So, it was with that same spirit in mind that I set out five years ago to visit the Natural Bridge in Rockbridge County, Virginia.

The best part about traveling to places where nature is the reason for the trip, is that you can always find history there.

The Natural Bridge, as I learned, was once owned by Thomas Jefferson.  That was an interesting fact I wasn’t expecting, but also it didn’t surprise me. Jefferson was a lover of the natural world and had come across the bridge on his travels through Virginia in 1767.  He was exploring the land west of his beloved Montecello.  Jefferson said of the Natural Bridge that  it was the “most sublime of Nature’s works.”

Jefferson also said of the Natural Bridge, “It is impossible for the emotions, arising from the sublime, to be felt beyond what they are here: so beautiful an arch, so elevated, so light, and springing, as it were, up to heaven, the rapture of the Spectator is really indescribable.”

How Jefferson became the owner of this beautiful natural wonder is an interesting tale in itself.  The story goes, briefly, that after seeing the bridge Jefferson set his mind to owning it.  Jefferson applied for a survey warrant in 1773 to gain the right to survey the land around the bridge.  Jefferson was then issued a patent in the name of George III for a 157-acre tract that included the Natural Bridge. It is estimated that he paid the Crown roughly $160 dollars in today’s money to for the land.  Jefferson visited the bridge several times between 1815 and 1821, taking two of his grandchildren along once or twice so they could see the bridge. At some point he built a two-room log cabin on the land.

In 1809, Jefferson had fallen into financial distress and he attempted to sell the land, but no sale was ever made. He then leased the land for saltpeter mining, otherwise known as potassium nitrate, which is a naturally occurring mineral that is vital in the production of gunpowder.  By 1815, however, he had changed his mind and decided he would never sell the land.  He wanted to save the land in some form as a public trust.  Jefferson wrote notes that he desired to find a way to ensure that the Natural Bridge would never be “injured, defaced, or masked from public view.”

As it ended up, the Natural Bridge was sold in 1833 as part of Jefferson’s estate.

The Natural Bridge is now located within the Natural Bridge State Park and is a National Historic Landmark.  The Bridge sits at the end of the Shenandoah Valley and is bordered by the Blue Ridge Mountains.

The Natural Bridge is a natural arch, formed by the rushing waters from Cedar Creek over time.  The limestone gorge that makes up the bridge is absolutely beautiful.

When you arrive to the park, you enter the Visitor Center and Gift Shop.  I mean to tell you this is as big a Gift Shop as any at Disney World.  It is huge and they sell anything you can think of with “Natural Bridge” written on it.

The fee to visit the Bridge is $6 per person.  You then are assigned to a shuttle that takes you to the natural wonder.  The ride is easy and gives the visitor a nice view of the plush and beautiful terrain that makes up the State Park.

Once you arrive, you walk a good distance.  There is not one inch of the Natural Bridge within your view while you walk toward it.  I literally walked around a curve and there it was.  It was incredible. I could see immediately why Jefferson found it to be awe-inspiring.  It was so much bigger than I had imagined it to be.  I could not believe how amazing it was and I was there in early spring, before the foliage had fully grown back in.

Here are the pictures I took of the Natural Bridge. 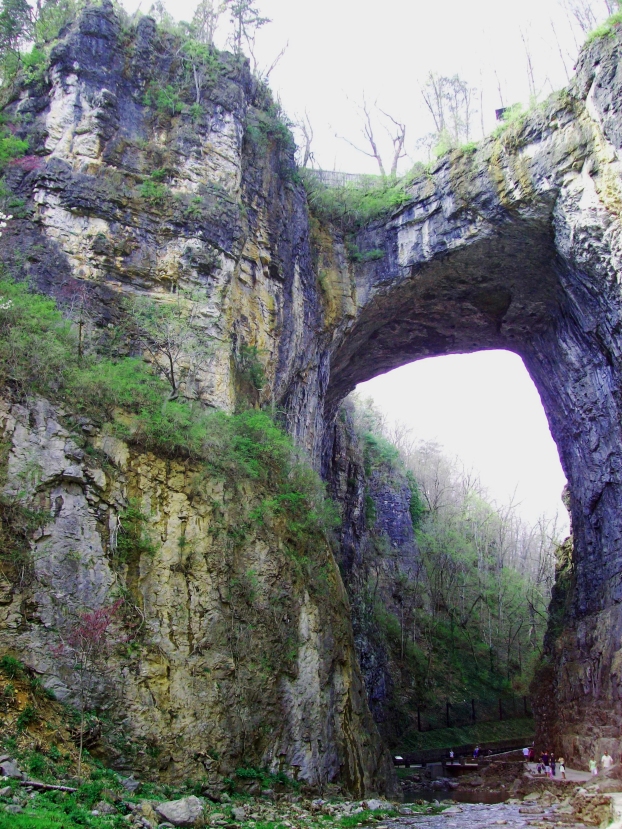 As I was leaving I got a bit of a fright.  I saw a fast movement out of my peripheral vision to the left of me.  I heard nothing.  As I walked by, I looked where I thought the movement came from and I saw nature in a way I had not anticipated. 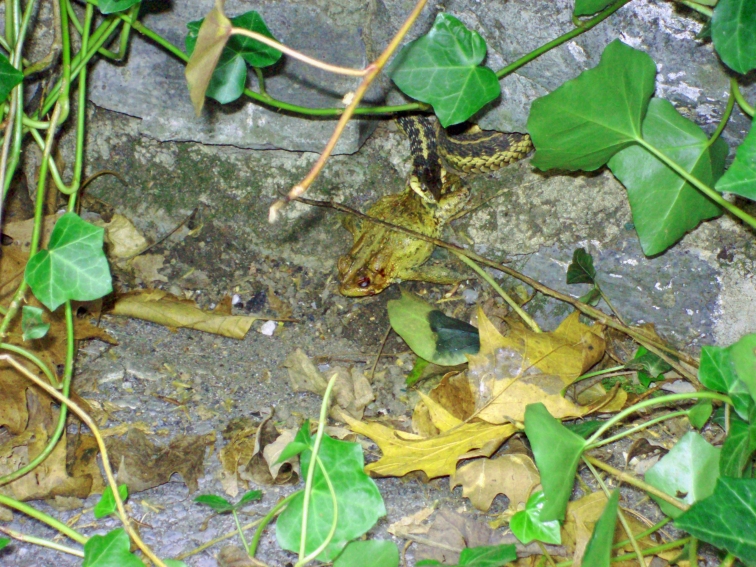 I went back to check on the frog after I took the Cavern tour and the park ranger said the snake tired before the frog and he hopped away when freed.  I was happy to hear that.

While I was in the area, as I stated, I toured the Natural Bridge Caverns.  This was a really great time.  It was a long walk into the caves, but so worth it.  It is dark in there so pictures did not really turn out.  I took a few and I thought I would share them with you here. 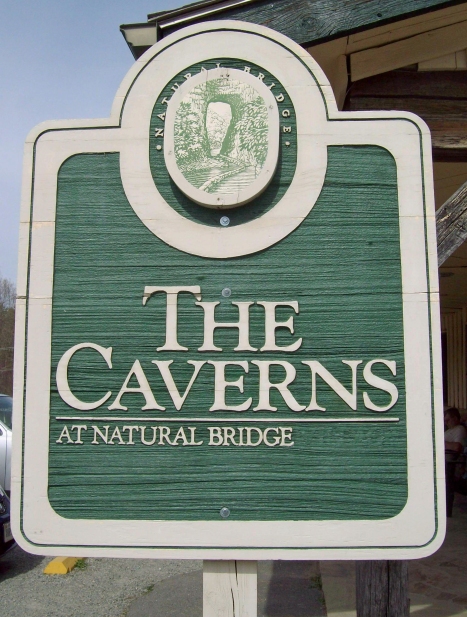 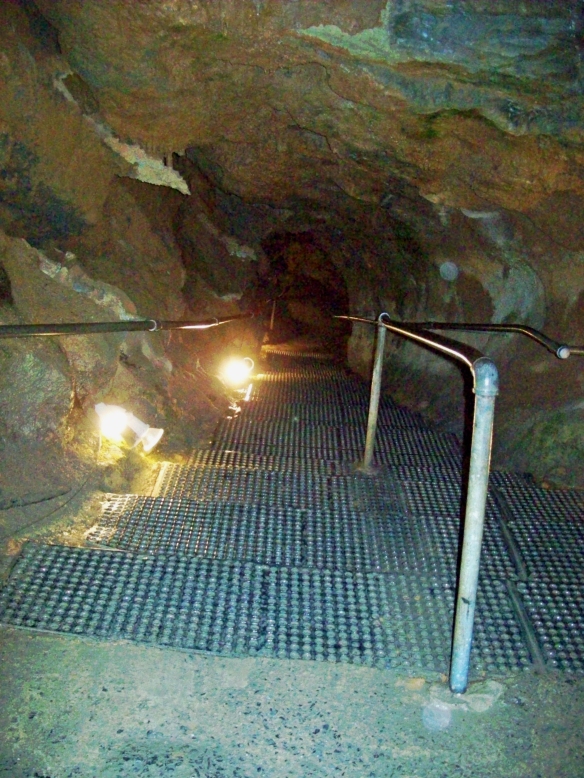 So, it ended up being a pretty amazing trip to the Natural Bridge.  I was able to be out in nature, see a natural wonder, learn some interesting history, and go deep into the earth to see what was happening there.  I feel that taking short side trips to places where the sign just sounds interesting, can lead to some very enjoyable new experiences.

Hi! My name is Tammy. I am an independent historian. I graduated Magna Cum Laude with a BA in History and a Minor in Film Studies from California State University, San Marcos. I am, additionally, a member of Phi Alpha Theta, which is the National History Honors Society. The goal of this Blog is to educate and to raise or further your interest in American history, including African American History. I hope to bring new research to those looking for ideas to further their own scholarship. I hope you find the reviews / travel posts / blogs about history informative. The goal is that you become interested enough in what you read here to read the books, watch the series or films, and/or visit these locations for yourself to further your own understanding of this most important history. Happy reading, happy viewing, and most of all, happy traveling...